Made with a dairy free enchilada cashew cream, these Whole30 bacon enchilada jalapeño poppers are the perfect party appetizer made with only 5 ingredients! A quick and easy dish that’s perfect for summer get togethers and game day. 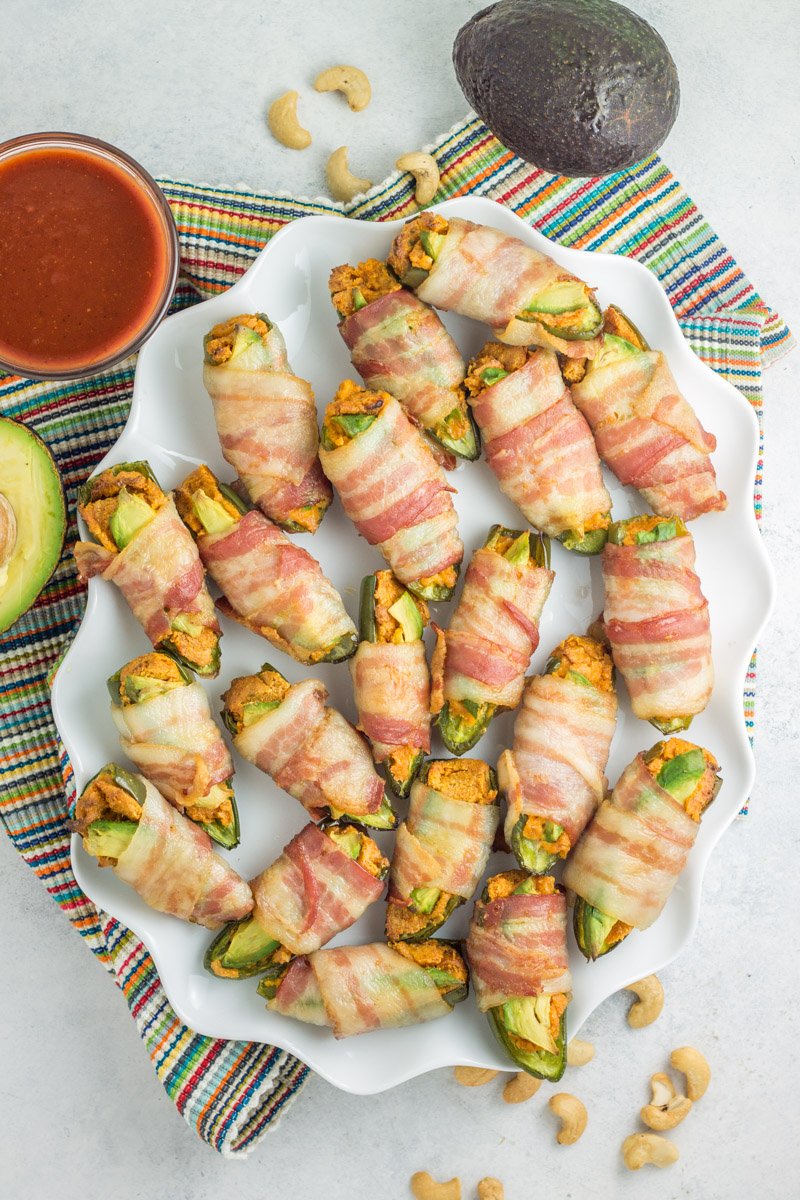 Neighborhood get togethers are a lot of pressure for food bloggers. Everyone expects something pretty bomb from me when we all bring a dish to share. Typically I rise to the occasion, but only when I have some time to plan. And go grocery shopping. And have help with the kids. And am feeling creative. Just all that…no biggie.

Even with all that pressure, I still pretty much live for outings in my hood. Yes, there’s lots of food and wine and laughter. But more importantly, the kids entertain each other and run around like crazy people. It’s sort of like a built-in babysitter that wears your children out so you don’t have to. Glorious guys, glorious. Even the baby was a piece of cake – just sitting on the grass, watching the older kids screaming with delight, dancing to the Trolls soundtrack, making complete chaotic messes of all of our garages. Neighborhood gatherings are my jam. 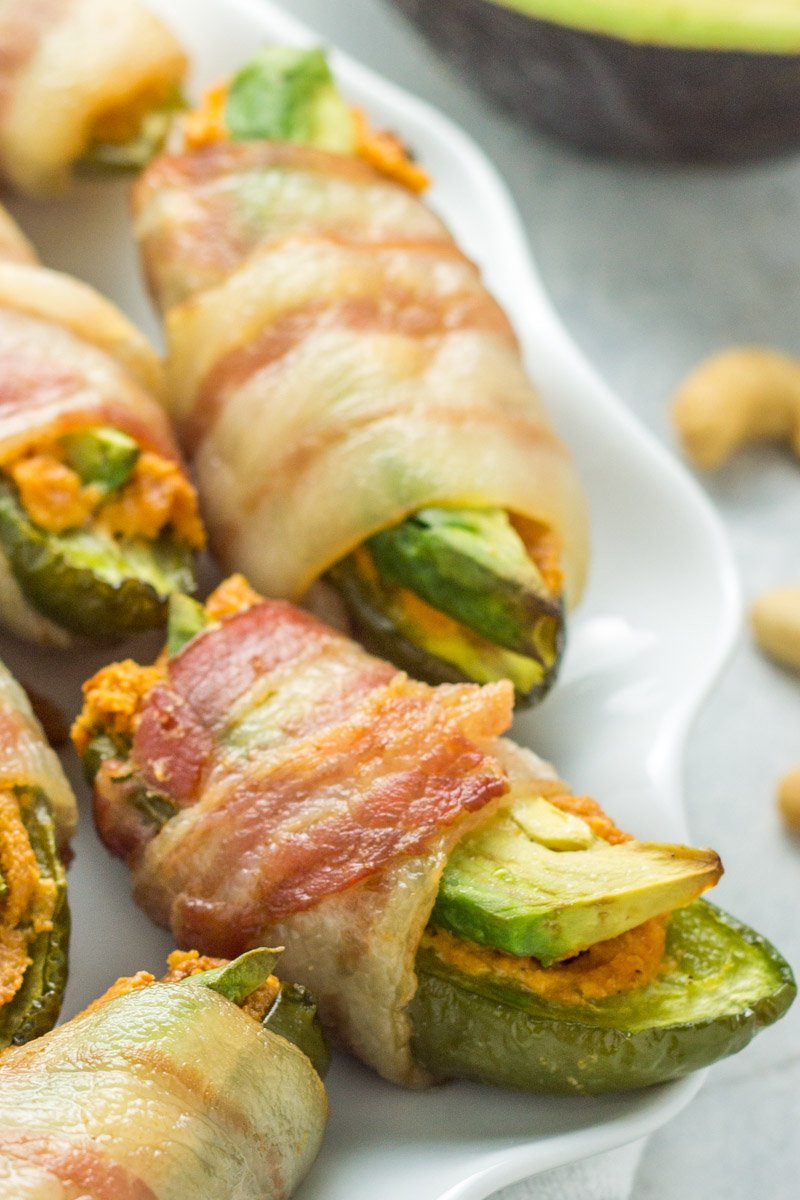 So when I texted the group that I was bringing bacon jalapeño poppers, the stream of appropriate and inappropriate gif’s ranging from Babe the pig to hot dogs raining from the sky made the pressure even greater to get these right. Especially because I didn’t tell them I was making a dairy free, paleo,  or even more ‘out there’ – a Whole30 bacon enchilada jalapeño poppers version of a classic favorite. I mean, can you even imagine the gif texts I’d get if I said, “oh hey guys I’m going to bring this traditional junk food appetizer but it will be a super clean version…and don’t TP my house”?!

Luckily, these were a HUGE hit. It wasn’t until AFTER I received rave reviews that I told them these puppies were paleo, Whole30, dairy free, the whole she-bang. Jaws dropped, praises were sung, food blogger status held strong. Phew. Oh and kids still alive. We know how to rock at this parenting (and eating) thing. 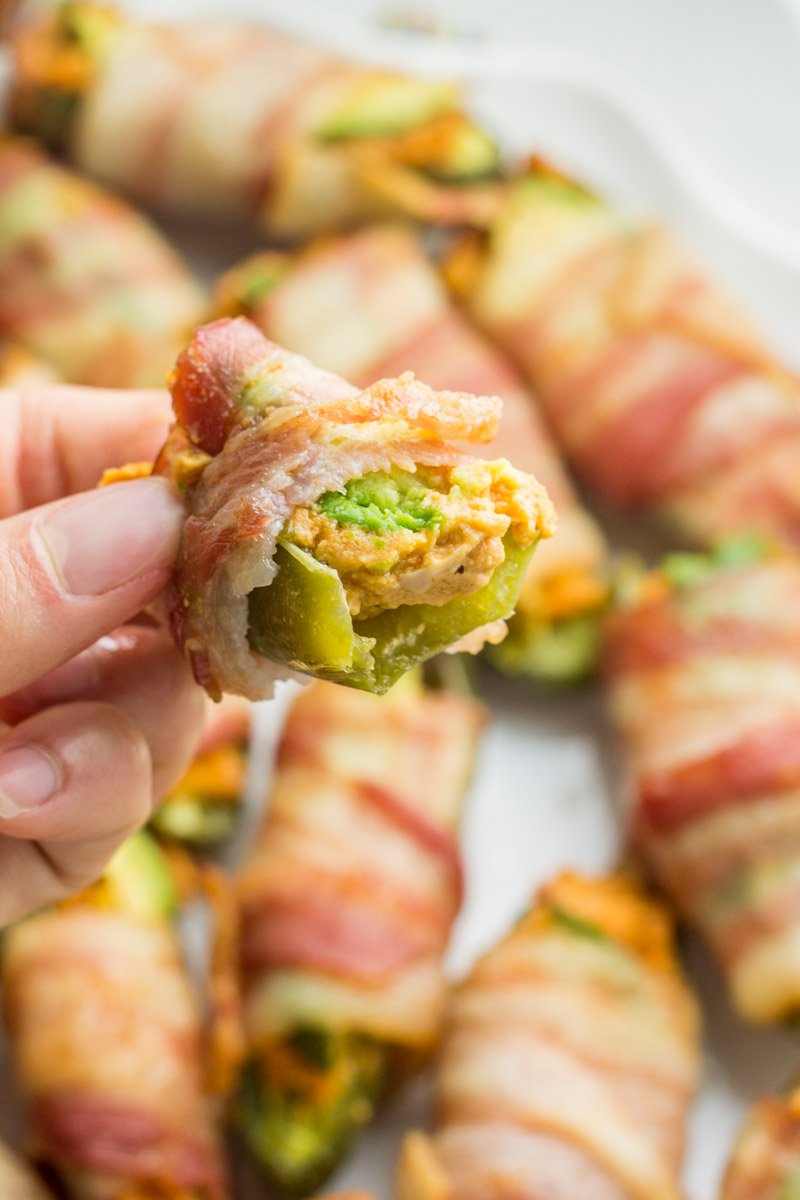 And with only 5 ingredients, these Whole30 bacon enchilada jalapeño poppers will definitely be on repeat all summer and rolling in to football season (yes, I’m thinking about football already). The center of each popper is filled with an enchilada cashew cream that subs beautifully for traditional cream cheese. Topped with a big ‘ol slice of avocado and wrapped in bacon, these jalapeño poppers have a super mild heat factor – since gutting out the seeds and membrane make them significantly less hot (for wusses like me).

If you aren’t doing a Whole30 or worried about keeping them paleo, I highly suggest adding a dollop of sour cream to top. Even more amazingness – trust me. If you ARE doing a Whole30, you’ll likely have to make your own enchilada sauce, as I’m not aware of one on the market that’s compliant. There’s a great (and easy) recipe here.

The bacon on these babies wraps so perfectly around, I didn’t need to secure with a toothpick, but you certainly can. These Whole30 bacon enchilada jalapeño poppers are highly addicting, crazy easy, and seriously bursting with flavor. A must make the next time you’re heading to a party and want to impress!

Here are some other ‘sharable’ recipes to bring to your next get together! 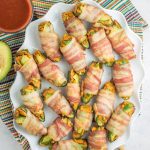 A dairy free, paleo game day favorite! These Whole30 Bacon Enchilada Jalapeño Poppers are the perfect healthy snack that will wow everyone at the party.