This shop has been compensated by Collective Bias, Inc. and its advertiser. All opinions are mine alone. #Swapyourburger #CollectiveBias

It’s grilling season people! You know what that means? Momma is off the hook for dinners! My hubby (aka the grill master), is logging major time in front of that hot metal beast while I , ummm work on the side dishes while trying to coax the dog from licking remnants off the hot grill and the toddler from thinking the steel utensils are walking sticks. Whatever your BBQ scene looks like, this roasted red pepper and eggplant tapenade is a must to spread over your grilled protein of choice. Burgers are pretty much a summer grilling staple – this we all know to be a universal truth. Just like coffee was invented for sleep-deprived moms, Cinderella’s feet were like a size four, and olive tapenade makes everything better. But sometimes our traditional beliefs are meant to be swayed.

Just for a moment, imagine subbing your beef patty with a tender and juicy fish burger, topped with savory roasted red pepper and eggplant tapenade.

WOAH, you did NOT see that coming, did ya? Fish – in burger form? With a roasted veggie spread? Is that even tasty? You better believe it – as strongly as wish you had style like Cinderella and a lifetime supply of Starbucks.

Trident Seafoods® Alaskan Pollock Burgers might be the unconventional summer staple that convinces you to swap your traditional burger. When you’re looking for a healthier alternative that is packed with Omega-3’s and lower in fat and calories that a beef hamburger, this.is.it. I’m talking 178% less fat, 94% less calories, and 25% less cholesterol! WOAH – does that convince you to swap your burger? Aaaaaaand because fast, easy, and healthy are my jams, I’m lovin’ life when I can pick up a package of these at my nearest Costco, have the hubs throw a few on the grill, and devour these low-carb, gluten-free, high-protein burgers for dinner in the summa summa summa time. I know when you think of fish, tatar sauce pops in your brain. Or is that just me? Don’t get me wrong, a big ‘ol dollop of tangy tarter sauce on a fish filet or burger can totally hit the spot, BUT once I created this roasted red pepper and eggplant tapenade, tarter sauce didn’t stand a chance.

Because let’s be honest, tarter sauce is great on fish and all, but you can’t use it as a dip for crackers, or smother it over chicken, or add a spoonful or two over scrambled eggs. YUCK. You CAN with this roasted veggie spread. Mmmm slightly charred eggplant, roasted red peppers, tangy balsamic with fresh basil and lemon juice combined with hints of garlic into a chunky and versatile spread? Dare you to tell me that doesn’t sound sooooooooo delicious. This summer tapenade/dip/spread/condiment/whatever-you-want-to-call-it is a great addition to have to amp up anything sizzling in your grill. Plus it’s paleo, vegan, and Whole30 compliant.
To create this yourself, slice one small eggplant in 2″ thick slices. Cut the top off of a red pepper, remove the seeds, then slice in half. Brush little olive oil over the eggplant slices and red pepper, then place directly on the grates of the grill set at 400 degrees for 6 minutes, then flip and cook an additional 4-5 minutes, or until the red pepper is slightly charred and soft, and the eggplant slices are soft with char marks.

Let the red pepper and eggplant cool. Then carefully remove the skin from the red pepper – this should be relatively easy to peel off if the pepper is roasted well. Place the eggplant slices and red pepper into a large food processor and add the fresh basil. Pulse a few times, just enough to combine the vegetables yet keeping the mixture chunky. Next, add the olive oil, balsamic vinegar, lemon juice, salt, and crushed garlic. Pulse a few times once again, just enough to combine. Serve immediately or store in an airtight container in the refrigerator.

Throw those beautiful fish burgers on the grill, char up those veggies, and reinvent traditional summer BBQ “hamburgers and ketchup” with juicy Trident Seafoods® Alaskan Pollock Burgers and the newest summer kid on the block – this smooth and savory roasted red pepper and eggplant tapenade. Dare to swap your burger this summer for a Trident Seafoods® Alaskan Pollack Burger? Be sure to enter below for your chance at winning at BBQ grill and some major Costco cash!
Dare To #Swapyourburger #Contest 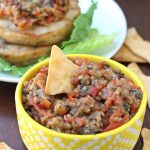