Remember that time you drove an hour to go to an apple orchard, because you thought it would be a fun family outing, only to get there and find out apple picking season is over? Oh and did I mention you have a cranky baby in the car, no diapers, and everyone is starving? Yeah, that was our scene last year. I learned my lesson this fall, and am on the ball with this paleo apple bread with caramel maple glaze. As you can imagine, I was super bummed when the apple picking was OVER, DONE-SKI, SAYONARA. I should have called beforehand, but it was fall. Apple picking goes the entire season, right? WRONG. The only silver lining to our failed attempt at family fun was the little shop next door that had every apple dessert known to man. When life hands you lemons (or apples), you eat apple bread.

I’m not gonna lie, we didn’t just have apple bread. We tried apple doughnuts, apple coffee cake, apple cider, and of course, apple pie. It was one of those moments when you eat your feelings. Despite my complete disappointment with the apple picking fail, the apple treats were worth the drive.

HOWEVER – sugar rush soon followed. Along with a windy car ride back home, I.was.so.sick. So when I created this paleo apple bread with caramel maple glaze, I knew I had to make something just as decadent as traditional apple desserts, without all the crazy amounts of sugar – and of course it had to be dairy free and gluten free. Introduce this beauty. WARNING, WARNING: This bread will fill your house with an irresistible apple/cinnamon aroma that not opening the oven will be a serious test of willpower. What sounds more like fall than cooler temps, crisp leaves, and baking apple bread? Unless you live in Southern California – basically there’s no fall so I compensate by making lots and lots of fall-inspired desserts. Oh, and hanging my orange and red leafy fall wreath on my front door (complete with the palm trees surrounding our neighborhood). Ok I know I wrote a warning in the paragraph above, but I need to throw out another warning: the caramel maple glaze may not even make it on top of the bread. Because you’ll want to drizzle it all in ‘yo mouf. Admittedly I had a little leftover, so I devoured it by the spoonful. No shame, no regret, no way I won’t double the recipe next time. It’s THAT good. Made with simple, real-food ingredients like coconut cream, dates, and pure maple syrup – it’s impossible not to love. Now that you’re in the fall-spirit and drooling, get your tush to an apple orchard STAT (or a grocery store  if that makes your life easier) and make this paleo apple bread with caramel maple glaze. You won’t regret it! 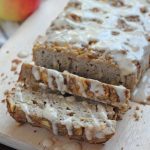