I’m kind of all about the mini’s this fall. Maybe because I have two little mini’s of my own now. Maybe because food in miniature form is just so fun. Or maybe because I like to think it helps me with self control, which in reality is a total bust when I can’t stop eating just one of these mini paleo pumpkin pies. My children resemble me much more than my husband – poor guy. He has the most crystal-blue eyes you’ll ever see in your life and our boys inherited my dark browns. And although the physical traits are fun and all, I’m REALLY hoping they also inherit my deep love of pumpkin pie.The hubs isn’t a huge pumpkin fan, which is a problem when you make 24 mini paleo pumpkin pies – basically I had to eat these all myself. I mean, I could have offered some to my neighbors, but I guess they kind of disappeared  before I had the chance…

They’re just SOOOO darn cute and SOOOO easy to pop in your mouth when you’re craving dessert. But take my advice – make these mini paleo pumpkin pies for a fall get together or Thanksgiving day. Because when you look at that empty tupperware and think to yourself, “wow, I pretty much just ate an entire pumpkin pie”, it’s kind of shocking. Story time: when I was a kid, mom made this huge batch of chocolate chip cookies. I asked my dad one afternoon if I could have one, to which he told me not before we had dinner that evening. So while he was showering, my five-year-old brain went into full McGuiver mode, scheming how I could have a cookie without him noticing. I don’t know why, but I thought taking a small bite out of EVERY SINGLE COOKIE would be sneakier than stealing an entire cookie from the batch. Because SURELY he would know if one was missing, but wouldn’t see the bite marks on every.single.one. Moral of the story, (aside from lying is bad and he totally noticed), I seriously lack self control, and when I need sweets, I NEED them. The holidays are all about giving, right?! So instead of hoarding all these for yourself, DO make them and DO bring them to share. Not only will peeps be impressed and baby talk these little mini paleo pumpkin pies (because they are so darn cute), they’ll be blown away when you tell ’em these pies are gluten free, dairy free, and naturally sweetened. Healthy and adorable?! No one can resist.

Made with a pecan and coconut crust, and baked in a mini muffin tin, there are a few special tricks I used to make sure each ‘lil pie came out perfect. First, pulse the pecans, coconut, honey, cinnamon, and melted coconut oil in a food processor until well combined and crumbly. Next, cut thin, narrow strips of parchment paper into 5-inch long strips and place the strips on top of each mini mold. Scoop one heaping tablespoon of the crust mixture and press it on top of the parchment strip and into the muffin mold to create the nut crust. Combine pumpkin puree, coconut cream, honey, maple syrup, pumpkin pie spice, and eggs in a separate bowl. Then pour one tablespoon of the pumpkin mixture on top of each individual crust. Bake at 350 degrees for 20 minutes, or until the center is set. Be careful not to bake too long, or the crust may burn. Once the mini paleo pumpkin pies are cooled, gently grab both ends of the parchment paper and lift each mini pie out of the molds. If you like a SUPER sweet pie, try adding a little more honey to the pumpkin mixture. I absolutely thought it was sweet enough, because I really like a good pumpkin flavor, but feel free to play with the mixture a bit to get the desired sweetness you prefer. Just don’t take a nibble out of every pie and think no one will notice. It’s not that sneaky.

This paleo-inspired fall classic is sure to be the talk of Thanksgiving. And soooo much more fun than a slice of pie, wouldn’t you agree? Get your ‘miniature’ game on with these mini paleo pumpkin pies and another mini pumpkin-inspired treat – paleo pumpkin pie mini marshmallows.

Looking for another healthy dish to share this Thanksgiving? You gotta try whole30 scalloped sweet potatoes. 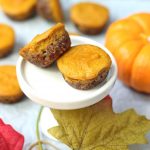