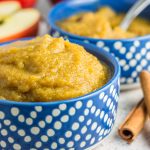 Healthy applesauce with a few sneaky vegetable – this Instant Pot Hidden Veggie Applesauce is made in just minutes, and tastes just like REAL cinnamon applesauce.

*if you don’t own an an Instant Pot or pressure cooker, you can simply roast the beets, carrots, and apples.