Oops I did it again- ate a dessert meant for two people all by myself. In two minutes flat. #sorryimnotsorry. But combining decadent chocolate with layers of pecan pie-inspired chia pudding, topped with maple-cinnamon glazed pecans is simply irresistible and unsharable. I promise you’ll do the same when you try these chocolate chia pecan pie parfaits. Pecan pie was never one of my favorites for Thanksgiving until recently. Something about a nut pie always weirded me out, until I tried chocolate pecan pie. Like WOAH. It’s no surprise that chocolate pretty much makes everything better, but seriously how can you not like a fudgy-bottomed pie with a creamy, sweet and crunchy pecan top? It’s serious decadence for serious dessert lovers.

Buuuuut decadence usually means super unhealthy. And if you’re like me, practicing self-control when it comes to sweets is REALLY flippin’ hard. Hence why I make healthier desserts like this, so I can eat two servings and be like “WHAT?” Yes this is insanely delicious and hard to have just a few bites, but you guys, how pretty do they look? I just picture a bunch of these mason jars of chocolate chia pecan pie parfaits sitting on a rustic-looking tray on a big table of pumpkins and tealight candles during Thanksgiving dinner. At least that is my fantasy – one day we WILL have a sophisticated Thanksgiving. Until then, it will be pot-luck style with whatever other lonely souls need company during the holiday. Because living thousands of miles away from family SUCKS. Which is probably another reason why I wallow in desserts when I’m missing my fam back home.

Next time I’m not even putting these parfaits in cute mason jars, I’m just throwing it all in an old tupperware container, crawling into bed with my 2001 state dance competition T-shirt, and diving in face first. I’ll post that shot on Instagram….

PS are you following me in Instagram yet? It’s kind of my new daily thrill – to find the humor the craziness of motherhood and record Instagram stories about it. Sorry, off topic. These chocolate chia pecan pie parfaits are made with a thick layer of chocolate pudding made with coconut cream, cocoa powder, and pure maple syrup, topped with molasses, maple, and spiced chia pudding, then garnished with crunchy and sticky cinnamon maple pecans. The perfect dessert that is way lighter than traditional chocolate pecan pie, sweetened naturally, and it’s paleo and vegan (sans the collagen)!

PLUS adding a big scoop of Vital Proteins collagen peptides makes this dessert extra amazing. Incorporating collagen into your diet has been linked to improving gut health and digestion, since our gut tracts are made of the same amino acids found in collagen. Collagen also aids the protection of our joints, AND prevents the signs of early aging by reducing fine lines and improving skin’s moisture. So why not add something that makes us look and feel awesome, right?! A little tip for making these when entertaining – you can absolutely make ahead to save yourself the “OMG I have people coming over and still so much to do” headache. Simply make and assemble the chocolate pudding and chia seed pudding in jars or glasses beforehand, then store in the refrigerator a day or two before the big event. I suggest NOT making the pecan topping until you are ready to serve, since refrigerating will make the nuts hard to separate when digging in! 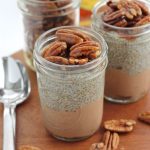 To make the chocolate pudding:

To make the chia seed pudding:

This post is sponsored by the awesome people at Vital Proteins. As always, all opinions are 100% my own. Thanks for supporting Physical Kitchness!